This blog was definitely not a top priority in my mind since there was so many things I was worrying about. Lots of animation and lots of clean up were done in the past few months.

We were able to make a trailer of it in time for the BFA Gallery using several shots that were done in time.

For the last stretch before finals, we could possibly finish it in its entirety.

After finalizing the animatic () our group was finally able to move onto animation. I personally was struggling with animating in flash due to having a bunch of technical problems with my computer and I couldn’t animate in flash. So I was basically animating in photoshop, which was a lot more time consuming and tedious.

I was then put on animation hold and had a group work day. I was then given the job to experiment with what kind of line work we’d want for this film. After I gave it a shot on what the line work could look like, my group member really liked it.

I then did a few tests of lineboil for when the characters were not moving. I tried doing it in flash first, which ended terribly since I was not able to get the nice line quality as I had in photoshop. Not to mention all the lines were incredibly uneven. When I attempted lineboil in photoshop, it ended up much more nice and smooth.

We all tried a shot at beauty frames which we experimented on what kind of line we should be using and color schemes. 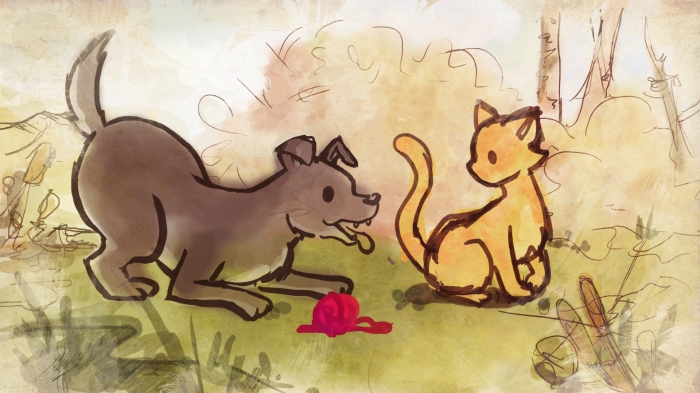 This one was made by Katherine though it was a bit rough. However, it did kind of show us what we wanted and didn’t.

Eileen experimented with the lines and colors as well, bringing us closer to what we wanted out film to look.

I also took a shot at making a beauty shot. The brush wasn’t a good idea, but the lighter shade of the line gave my group some ideas along with the muted colors.

Eileen’s next beauty frame shot was a lot closer to what we wanted. I really liked the line color and that it didn’t distract from the very washed out colors of our film.

After weeks of trying to achieve a final character design for each of the characters, we were finally able to settle on these: 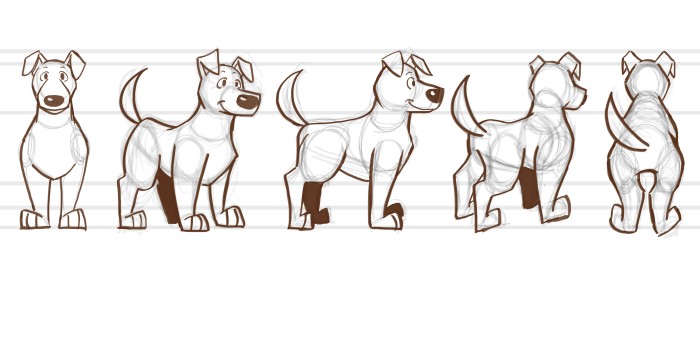 It took forever to get a design where everyone was happy and hopefully it’s simple enough to animate fairly easily. I was happy to be able to make the final turnaround for our animators to use. Eileen went ahead and made the various poses of the characters while I did the construction of the heads and bodies. 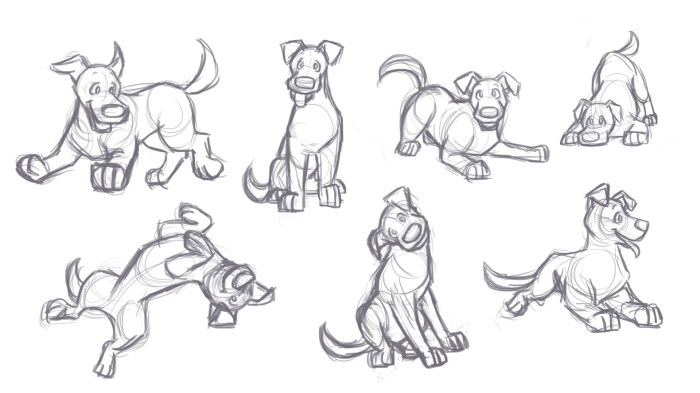 Poses are by Eileen Bray.

Modeling Sheets were done by me.

We were still kind of wrestling with the designs of our two main characters of the film as I felt like we just couldn’t settle on one.

Though we were able to agree on what colors they would be. We eventually decided to use Eileen’s designs for the two characters and I drew out the turnarounds.

Eileen had also made models for the characters which helped me with the turnarounds since some of the positions confused me. 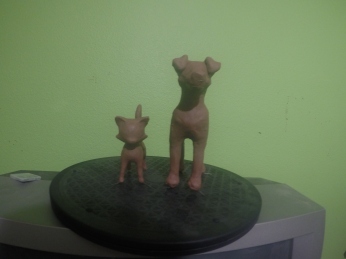 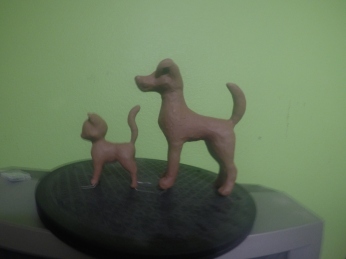 I was put up to the task of testing out colors for Cat and Dog. I had a reference palette I found on deviantart so I could see the general color for each animal. And so I experimented using different colors. 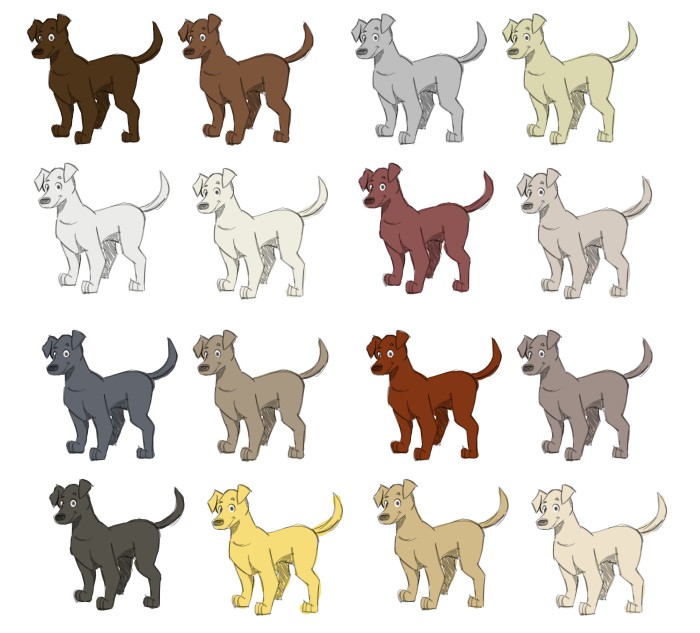 After showing this to the rest of the group, they said they liked a more muted color instead of the very bright and in your face colors like the yellow and reddish ones. I then attached the scarf to the dogs to see if the color complimented the colors.

The scarf color did look nice on darker colored dogs like the two on the bottom most left side. My favorites would probably have to be the same two I mentioned since the color really popped on them.

After I played around with the dog colors, I moved onto the cat.

After showing my group the different cat colors, we all agreed we liked the lighter coats rather than the dark ones. Initially we didn’t want to have the cat be the light orange because so many other cats were colored that way. Though it seemed like it was the best color.

We still went through a series of dog designs and had Eileen’s sister, Stephanie draw up several possible dog designs.

All of us were pleased with the possible designs. Initially, Katherine had wanted the dog to have pointed ears. And while I do love dogs with pointed ears, Eileen and me both agreed that the dog should have floppy ears so it would be easier to distinguish between Cat and Dog. Since when I showed my mentor, she got Dog and Cat confused at certain points in the animatic.

However, we were unable to have Stephanie come up with more designs and since we had to keep moving with the project, we had to make the design of Dog ourselves. After several meetings and character designs we initially settled on Dog’s design.

However, after a critique in class, we had to change it since Dog was drawn too much in the Disney style. Truthfully, I was taking too much of the style from Disney as I was looking at Pongo from 101 Dalmatians and Balto for reference. We were warned that drawing Dog like this would be difficult and didn’t quite fit the style of our film. So I went back and tried to simplify the design.

Since we want a more simple feel to our film, I had to simplify what I already had so it would be easier to animate when the time came. We had a session where we all worked on Dog’s design but just couldn’t find the right style or look.

While our group was busily trying to get an animatic together, we had a Visual Development Artist (Stephanie Bray) work on character designs. The initial character designs were mostly just exploring the possibilities for our cat and dog.

The designs were simple, but it gave us something to think about with what exactly we wanted the characters to look like. I personally envisioned a skinnier cat with a slim figure with little to no excess hair to make it easier for animation purposes.

For the second pass on character designs, there is much more variety our visdev artist provided for us. There were a lot of different aspects that we really liked from different designs of the cats. Such as the eyes on the fluffier black and white cat and the body of the black cat at the bottom left.

Title: You and Me (Tentative Title)

Project Description:
This project is going to be a narrated 2D animated short film geared towards kids about an introverted cat and an extroverted dog. The message we are trying to convey in our film is to be yourself and accept others as themselves. For the look of the film, we are inspired by the storybook-esque style of Ernest & Celestine and the animation style in The Casebook of Nips & Porkington.

Research Objective:
Our research objective is to explore the theme of introversion and ultimately show through our short film that being quiet is not a weakness and it doesn’t mean we are any less than those who are outgoing. This theme is important to us because, as introverts, we can all relate and want to give others a glimpse of what it is like to be an introvert in an extrovert-filled world. For this film, we will be doing a lot of background research on the overall topics of introversion and extroversion. 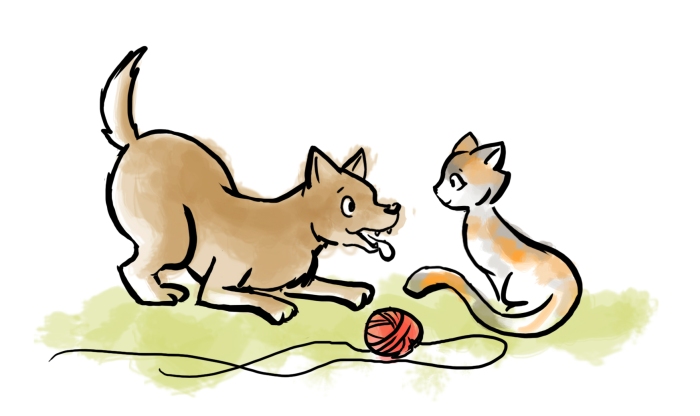 We pitched the new idea of the dog and cat to the class and it seems that while the story was still a bit on the weak side, the idea was better. It still needed a lot of work but we decided to stick with it since it seemed that the class all seemed to like the new idea.

I wasn’t completely convinced on the idea but helped it progress as best as I could. We had a presentation to make for the faculty to see if we could get any more ideas. So after a couple more weeks of trying to sort through the critiques and story suggestions, we came to the week of preparations for the presentation for the faculty.

Unfortunately, that week my arm had been hurting a lot due to putting too much stress and bad posture on it. So I was unable to help with the art during that week. However, I was able to help out by gathering all our information and creating the powerpoint we used for the presentation.